How Long Does It Take to Charge a 3D Pen?

Are you worried about leaving your 3D pen connected to a power supply for too long? People often wonder how long they should leave a 3D printing pen charging.

The fear is damaging the pen if you charge it for too long. On the other hand, if you undercharge it, it may not complete the project you are working on. 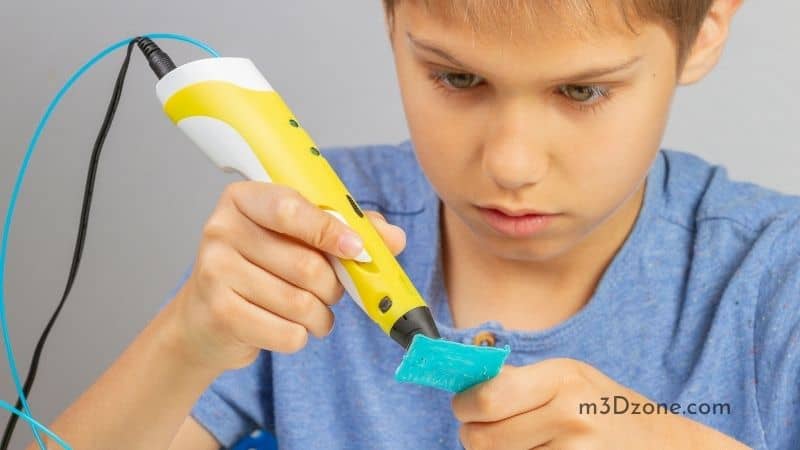 A 3D pen requires two hours of connection to a power supply to be fully charged. After using your 3D pen, connect it to a power supply using the USB cable it comes with. All you need to do is plug it into a powered device, such as a laptop or a power bank. The device must have a USB port that you will insert the USB cable.

When dealing with 3D pens, you should not allow them to charge for more than two and a half hours. Read through this article and understand the logic behind this charging time.

Related: How Much Energy Does a 3D Printer Use?

This is a crucial FAQ that experts and people who are new to 3D pens often ask. The good news is that charging a 3Doodler Start is a matter of connecting it to an electrically powered device with a USB port. It is safe and straightforward for even children who are 6 years old.

Unfold the cable that you buy your 3D start with and plug it into a device of your choosing. It may be a power brick, a computer, or any other so long as it has a USB port. If you can plug in your power brick to a power outlet, then connect the cable to charge directly, the pen charges more efficiently.

How Long Does It Take for a 3D Pen to Heat Up?

From the moment you press the orange button to power your 3Doodler start on, it will only need about a minute to heat up. Technology has made it easy to know the progress whenever you are operating this device since it has an LED indicator icon that changes colors.

When you power the 3D pen on, the LED indicator usually has a red light on. As temperatures rise within the 3Doodler start, it gets ready for use. The indicator will then display a green light signaling you that you can proceed to the next step.

If you realize that the indicator light is not turning from red to green, you need to restart the 3D printing pen. This delay is caused by your 3Doodler switching to its idle mode. Turn your 3Doodler start off for about five seconds, then power it back on. Doing this triggers it to start heating up.

Why a 3D Pen Doesn’t Charge?

Another FAQ that people often ask is why their 3D pens fail to charge. The problem may either be your USB cable or the 3Doodler start itself. The first thing you should do is checking the micro USB cable.

Ask a friend or colleague to lend you their USB cable and try charging with it. You can also buy a new cable from an electric store or on the web. If the 3Doodler starts charging without any disturbance, then you need to buy a new USB cable.

On the other hand, if the 3Doodler start still doesn’t charge, check whether the device you are using to charge your 3Doodler start has enough power.

At times you will find that your laptop or power bank has enough power to power on, but the power is not sufficient to charge your 3D pen’s battery. In such a case, connect your charging device to a power outlet first, then plug in your 3D pen using a USB cable.

Once the pen is fully charged, continue making the 3D figures in your project book.

Once you have charged your 3D pen and it’s ready for use, step 1 in a drawing project is inserting a suitable filament. You have to carefully select the printing material to damage your 3D printer or 3Doodler. The 3Doodler start pen works the same way as a glue gun.

The eco plastic has to be entirely safe for kids and adults. On the bright side, your 3D pen uses the same kind of plastic filament as other 3D printers. PLA and ABS are the non-toxic plastics used for making 3D art.

Is PLA plastic filament biodegradable and safe for use in a 3Doodler start pen? This is another of the FAQ questions we often get. The answer to this FAQ is yes, PLAs are biodegradable, non-toxic eco plastics. PLA eco plastics are specially designed to be completely safe when used in a 3Doodler start. They are readily available, and a person can get them at a low price.

The advantage of using PLA filament is that it is non-toxic, making it safe for kids at age 6. You can buy a 3Doodler EDU set for your children for 3D pen lessons. The EDU sets have a collection of items that are safe for children. For instance, they contain PLA plastic filament that is BPA free and completely biodegradable.

The heating element of a 3Doodler that uses PLA plastic filament is completely safe for kids. When children are learning how to use 3Doodler Start pens, make sure you instruct them to avoid touching the hot parts on the pen.

It is also known for its biodegradability, meaning you can dispose of its waste in the bin where you put your household compost.

Another resource that you need to have when working with 3D pens is the ABS plastic filament. The downside of using ABS plastic filament is that it is not biodegradable, making it a little less eco-friendly. Nonetheless, ABS is strong with a high melting point, and a person can make firm 3D figures with it.

To answer an FAQ question on most people’s minds, ABS plastic filaments are better used by adults rather than children. The appropriate temperature settings to use in your 3Doodler start when working with ABS is 220ᵒC.

Acrylonitrile Butadiene Styrene plastic filaments are impact resistant, which means you should not be worried about the 3D figure you make breaking easily.

Charging a 3D pen requires you to have a USB charging cable to plug into an electrically powered device. Leave the 3Doodler to start connected to the power source for up to two and a half hours.

You will see a yellow flashing light during this time, which indicates that the 3Doodler start is charging. If the pen doesn’t charge, check whether the cable is faulty or whether the charging device you are using has enough power.