How Safe Is a 3D Printing Pen?

Are you an admirer and a potential user of the 3D pen? Could you be concerned about its safety standards? The pen, just like any other gadget, needs a user to take a certain level of safety precaution. 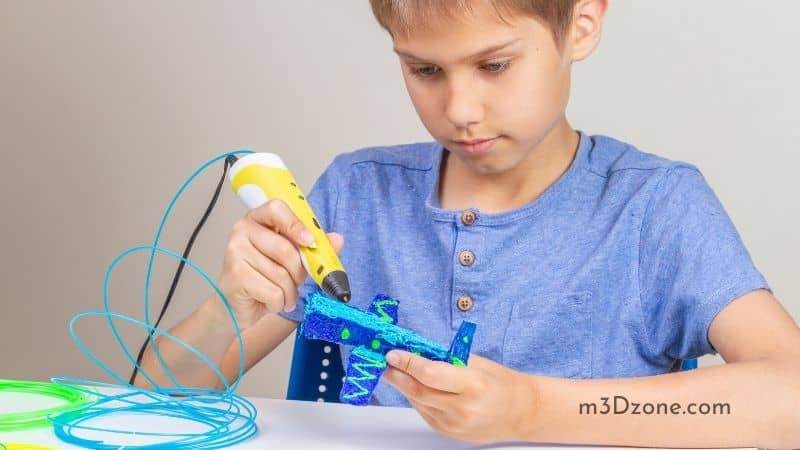 3D pen printing is safe because of the way it works. Plastic ABS or PLA filaments enter the pen through small internal engines after plugging it in a power outlet. It heats up and starts extruding the filaments into shapes and models of your choice.

Through extensive research, we have come up with the best guide about the pen’s safety. So worry not!

3D pens are non-toxic. However, the same can’t be said of the ABS and PLA filaments that they use. The filaments constitute harmful toxic plastic material.

Lab tests show that ABS is significantly more toxic than the PLA filament. Therefore, you may prefer the latter for your child’s 3Doodler Start. The test also shows that emissions vary from 3 to 30 times when using ABS to those that occur when using PLA for your 3D printer printing project. So, it would be better to give your kids 3D pens for printing instead of 3D printers.

3D pen users recreate 3D print objects or create new brands of objects using 3D pens. The pens add a lot of value in terms of creativity to their work. For instance, you can fill the gaps in 3D printed models with these pens.

The 3D printer provides the best printing products. It’s result-oriented and all about the end product. On the contrary, those keen on the process go for the 3D pens for printing.

The 3D pen for kids gives beginners and children the rare opportunity for 3D printing. It’s user-friendly and facilitates the creation of 3D figures of different shapes and standing.

Kids, irrespective of age group, can use the Child-safety PLA ABS 3D pen to make 3D print objects. A parent needs to share with his child the benefits and the safety precautions of the 3D pen. A kid will tend to be fascinated with the filament coming out like the glue gun; they should be discouraged from touching the plastic as it remains hot for a few minutes.

The creative and artistic bunch draws the most benefits from 3D pens. Because using their hands to make 3D figures ranks first in building their creative talents. The pens enable them to start fulfilling their creative potential through printing objects.

Most salespeople advertising 3D printers never mention anything about the hazards of fumes emitted out of the nozzles and through the glasses. Most of the 3D printing processes use a liquified plastic through heating and then jetted out through the nozzle.

Inhaling fumes from some of these plastic materials for long durations is harmful.

3D pen boasts unique sensors that cool it extremely fast immediately it detects the pen is not in use. The cooling and the pen shutting down process ensures nothing around it gets burnt. This includes people that may accidentally grab the nozzle tip.

The absorption of large quantities of VOCs and nanoparticles could be detrimental to your health. It causes pulmonary diseases such as bronchitis, tracheitis, asthma, and even cancer.

Using a 3D printer for a prolonged time can be harmful. So, it is advisable to buy a separate 3D printer enclosure if you didn’t get one when you purchased your 3D printer.

The enclosure restricts the dangerous fumes within, leaving the 3D printer user safe as he makes 3D print objects.

Are 3D Printers Safe for Kids?

3D printers are not safe for kids at all. Never leave your kids alone with a 3D printer. If anything, parents need to protect their kids from the risk that 3D printers provide. The design and features of most 3D printers mean the printing process is way a risk considering the printing plastic items are subjected to high temperatures.

Unknown to many children is that ABS is not a user-friendly filament and it is dangerous, unlike the PLA. The extruded ABS filaments heat up to around 260 degrees Celsius, something that poses an extreme danger to children. Printing an object using the 3D printers feature may sound like something easy and harmless.

If children touch it at the hot end, they can get severe burns. Also, the heated beds on which the 3D printers extrude their models heat up to 100 degrees Celsius, which is way too hot for kids to handle.

Therefore, it is advisable to buy a 3Doodler Start for your kid’s 3D printing needs. Salespeople post a lot of commission through advertising Child-safety 3D printing pens for this reason.

How Safe Are 3D Pens?

A 3D pen brings with it the safety challenges that are the concern of pen users. Handling a 3D pen requires taking lots of precautions and safety measures to handle the material extruded.

The best 3D pens work like a hot glue gun providing a unique and delightful experience. Like any other machine, the professional printing 3D pen produces heat from its components including motors.

A majority of children tend to be naturally attracted by 3D printing. Kids get attracted to 3D pens because they enable them to make 3D art as they improve their level of imagination and creativity in making different items.

3Doodler filament, such as ABS filament, is manufactured using non-toxic material. You can get the filaments in different colors which answers the question of visualizing multi-color objects or things. If you melt the plastic, its use is relatively safe.

Cooling and heating processes often bring a lot of safety concerns. With this 3D pen, the concerns are well taken care of meaning you can rely on the pen. The pen boasts special sensors to cool it when hot. The sensor detects when 3Doodler is out of use and cools down automatically.

Fundamentally, 3D printers are not as safe as 3D pens for printing. Therefore, you and your kids need to have safety precautions we have discussed in this article in mind every time you handle these devices.

Kids enjoy using the 3D technology, but it’s advisable you buy them PLA filament pens for printing rather than expose them to hazardous 3D printers.

In summary, you and your children need some training level to enjoy the use of 3D printing safely and healthily.