How Much Power Does a 3D Printer Use? 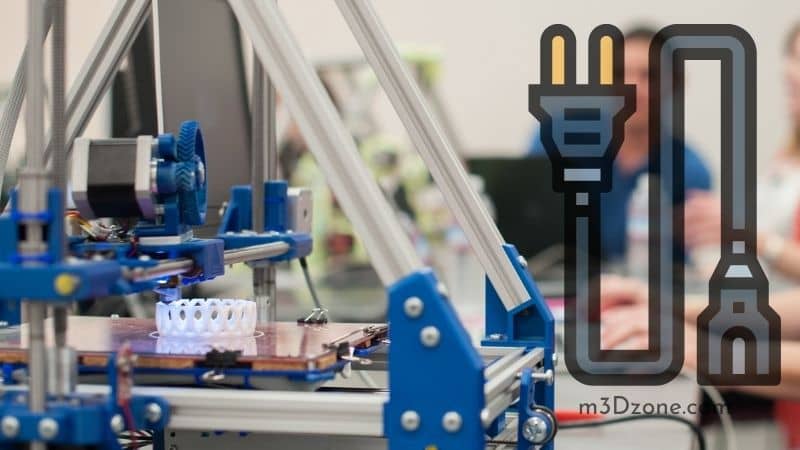 Different 3D printer models draw a different levels of electricity. For example, printers with larger build platforms consume more power. Printers that can print at a higher temperature tend to use more electricity as well.

Electricity, being a recurrent cost, can’t be ignored. So, keeping power expenses low needs to be prioritized.

So, How Much Electricity Does a 3D Printer Use?

This article provides answers to your power consumption concerns. Stick around to find out more.

Are 3D Printers Expensive to Run?

3D printing enthusiasts need to be keen on the cost of running their 3D printing sessions. Printing expenses tend to fall into the following categories.

Depending on your 3D printing skill level, you need to pick the right printer to manufacture the models or objects you want at a friendly budget.

The printer cost depends on the size of the 3D printed objects, the technology, power usage, and the printer’s make and brand.

Other costs may arise from the need to add upgrades to your printer. It can happen when you run into challenges like nozzle jams. Otherwise, the printer cost is a one-off cost.

How Much Electric Does a 3D Printer Use?

A 3D printer that requires a 30A 12V draws a maximum of 360 watts of power (Power=Current x Voltage). A printer with a hotbed of 205 degrees celsius and a heated bed of 60 degrees celsius uses 70 watts per hour which translates to 0.7KWh for a 10-hour print.

It, therefore, adds up to much power usage considering the non-stop nature of the FDM printing operations. Hence, it may cause a big power bill.

For other printers, heating the print bed consumes a lot of electricity as the printer needs 120 Volts of power. That means it needs a power supply of 600 watts per hour to get the bed heat up and peak.

If you’re looking for a 3D printer power supply, the first thing you need to do is choose the output voltage. When choosing voltages, you should consider your hot end.

You can choose a 12V or 24V power supply 3D printer. Check your hot end’s specifications to determine which you own.

The major consumables worth noting in 3D printing projects are filaments and liquid resin. Filament costs differently depending on the material made and your creativity with 3d print ideas.

For example, generic PLA costs less as its composition is plant-based. On the contrary, other filaments such as the ABS may be more expensive.

On its part, standard resin costs around $50 and is cheaper than AnyCubic‘s ECO resin which costs $75.

How Much Does It Cost to Run a 3D Printer Per Hour?

Running a printer comes with a cost. The initial printer cost and cost of consumables like towels, isopropyl alcohol, other cleaners, and rubber gloves need to be considered as well (see at Amazon).

However, power consumption needs to be tackled to ensure the printer consumes a reasonable measure of a kilowatt-hour.

How Much Energy Does a 3D Printer Use?

The amount of power per kWh that a 3D printer uses depends largely on its powered components. Some of the printer parts that require a lot of electricity to power include fans, stepper motors, hot end nozzles for melting filament materials, and a heated build platform.

To answer the question on the cost of running a printer per hour, we may need to consider:

3D printer energy consumption depends on the type of 3D printer and the duration of the printing. For example, a 30A 12V printer draws 360 watts of power, and most standard printers use 50 watts of power per hour.

Does a Printer Use a Lot of Electricity?

Determining how much power your printer uses can be tricky. All you need is to use an electricity monitoring tool (see at Amazon) to determine your power usage correctly.

The tool can be deployed as an interface between your 3D printer and the electricity socket. Kill A Watt Electricity Usage monitor from P3 is one such tool.

Factors Contributing to the Level of Power 3D Printing Consumes

The hot end remains one of the most power-draining components of a 3D printer. Specifically, the nozzle’s level of power consumption is very high.

Now, the amount of its power consumption depends on the temperature you will set. Temperature settings depend on the filament type, meaning high-temperature filaments such as Nylon and ABS consume more power.

The temperature settings of the printer heated bed go hand in hand with that of the hot end nozzle. It improves bed adhesion and prevents object warping during the 3D manufacturing process.

It is a problem that is more pronounced when working with high-temperature filaments.

The higher the temperature settings and the bigger the print bed (see it at Amazon), the more power consumption.

Components of 3D printers such as stepper motors and Z-axis can heat up to as high as 200 degrees Celsius and stay at that temperature level for the better part of the 3D printing process.

Inevitably, there will be heat losses, and compensation for it may only be through continuous heating.

In mitigation, if you can find a way to cool down the heating parts, it lowers power consumption.

There exist two important sets of stepper motors (check at Amazon) in 3D printing. The first set controls the extruder gear, while the second controls the nozzle movement during 3D print manufacturing.

Stepper motors are small and consume relatively low power. However, they run for the entirety of the 3D printing projects hence accumulating high costs.

The control board (see the price at Amazon) constitutes multiple electrical components that control the printing process. The printer’s brain controls all the other movable parts to enable the printer to function. Though it doesn’t use a lot of power, overall power consumption may be significant over time.

How Do I Lower Electricity Costs With a 3D Printer?

Now that you know the factors that may increase power consumption when 3D printing, you are better placed to mitigate against it.

You may need to opt for smaller 3D printers instead of the larger ones that consume more electricity during printing. Power is curtailed through smaller printers as they don’t need many plastic materials and other consumables. Also, their bed size is smaller, meaning they use less power.

Going for PLA filament will significantly help mitigate this problem as it needs a lower temperature to melt.

One way of reducing your electricity bill may be to change your printer nozzle and use a bigger one. A larger nozzle ensures that more filament is deposited quickly. Quicker filament deposit makes the process move faster.

3D printing in a warm environment serves to reduce the amount of heat needed to produce the prints. You may not need to set your printer requirement to the maximum standard, as the minimum setting will suffice since the environment is already hot.

3D printing is fun and enjoyable to most people (3d printing dragons, 3d printed swords), but the cost of printing can’t be ignored.

For example when 3D printing a whole house the cost will be much higher. And if you are wondering, yes, a 3D printed house is considered a durable structure these days.

Initially, the 3D printer cost is a one-off cost, and other costs such as those printer consumables and electricity take priority afterward.

We have provided well-researched information that enlightens you on what causes your 3D printer power consumption to rise higher and the ways in which you can use it to control it.