3D Printer Thermistor. What It Does in a 3D Printer?

What Is a 3D Printer Thermistor?

A thermistor is a resistor whose resistance varies rapidly and in a predictive manner with changes in temperature.

Thermistors are made from semiconductors, mostly germanium and silicon, and their resistance value depends on the magnitude in their temperature range.

What Does a Thermistor Do in a 3D Printer?

Thermistors are used in 3D printers as temperature sensors. They are fixed in temperature-sensitive points such as the heat bed and the hot end. In these points, they monitor the temperature and send the data to the microcontroller. 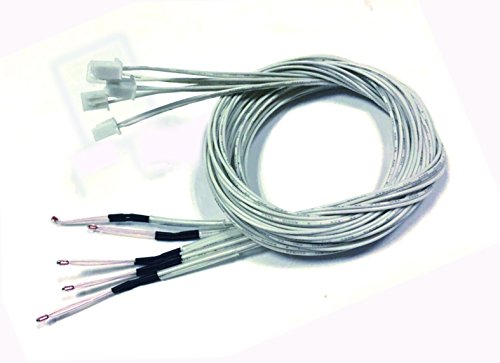 Thermistors are made of a pair of wires joining each thermistor. The pair, which has a short wire length, is usually led back to the controller board.

When they heat up, their resistance change is detected and mapped against calibration data by the printer’s firmware to calculate the temperature changes.

There are two types of thermistors:

This is the most commonly used type of thermistor in 3D printers. The NTC thermistor offers variable resistance depending on temperature. When the temperature rises, the resistance goes from high to low and allows the current to go through.

At power-on, NTC offers an additional series of resistance when used to mitigate for inrush current. Resistance drops to a negligible amount during normal temperatures when the thermistor self heats with a current, allowing normal current flow.

The PTC thermistor also offers variable resistance depending on temperature. As temperature increases, resistance rises from low to high and prevents the overcurrent.

PTC thermistors are used in certain scenarios rather than NTC thermistors. These are: in extreme temperature conditions, in equipment with almost zero-reset time such as digital thermometers (check at Amazon), or in a system that experiences frequent shots.

Why Are Thermistors Good Sensors?

Thermistors are advantageous for use in many applications as sensors because of their high durability and ease of use since their behavior is quite predictable. Their use in applications for temperature measurement and control is outstanding.

Evidently, a change in electrical resistance of a thermistor due to a corresponding temperature change is notable irrespective of whether the thermistor’s body temperature is altered due to radiation or conduction from the surrounding environment or due to “self-heating” caused by power dissipation within the device.

The thermistor’s body temperature will be dependent on the thermal conductivity of its environment and also its temperature when a thermistor is used in a circuit where the power dissipated within the device is enough to cause “self-heating”.

Thermistors are “self-heated” for use in applications such as airflow detection, liquid level detection, or thermal conductivity measurements

How Do I Change Thermistor on My 3D Printer Heated Bed?

The following steps may be used to replace the thermistor and the heating tube.

You will require the following tools:

Step 1: Dislodging the fan next to the nozzle

Firstly, ensure that the nozzle is cooled to room temperature, to avoid injuries. Detach the two side covers by using a screwdriver, then loosen the two screws next to the fan.

Unplug the connector of the fan using tweezers to hold down the port, then dislodge the fan.

Step 2: Removing the thermistor and the old heating tube

After cutting, use the 1.5mm hex key wrench to loosen the screw in the heat block, and extract the old heating tube and thermistor.

Step 3: Installing the thermistor and the new heating tube

Ensure both ends of the heating tube to the heated block are of equal length.

Ensure the thermistor is within the heat block, then tighten the screw and put the new heating tube and thermistor through the module. Plug the connectors into the ports.

The heating tube and thermistor can not reach the hot end.

Plug the fan connector into the interface then attach it to the module.

Install the two side covers.

Connect the module to the controller, then switch on the power. Load the printer filament, calibrate the heated bed and start a short print to test.

Check if there could be issues as it prints.

How Do I Test the Resistance of a Temperature Sensor?

There are various ways of checking for resistance. For this discussion, we will consider checking resistance using a multimeter.

The reading will vary across temperatures since it is a thermistor. It Is preferable to take your reading to room temperature resistance (25℃)

Steps on How to Check the Resistance:

To check temperature resistance we shall need; multimeter and multimeter probes

Step 1: Remove the fiberglass insulation on the pair of wires connecting the thermistor.

Step 2: Set the Multimeter range to the rated resistance of the thermistor e.g. 100k.

Step 3: Apply the multimeter probes to the two wires. The multimeter should display the temperature resistance.

How Do I Know if a Thermistor Is Bad?

Most 3D printing thermistors have a temperature resistance of 100k at room temperature. Various symptoms of a bad thermistor in a 3D printer include:

Printer materials normally have recommended print temperatures. If the printer requires a higher temperature to extrude the materials than the rated temperature, the thermistor can be bad.

A thermal runaway is a situation in which a 3D printer heats up to extremely high temperatures and can not stop. When this happens, the printer may catch fire!

Thermal runaway may be due to a variety of reasons. However, the most probable cause is when the thermistor is not properly aligned.

Due to the poor alignment, the firmware will continually increase the heat so that it reaches the target.

The increase is due to its inability to properly sense the current bed temperature or current nozzle.

How to Calibrate Your 3d Thermistor

There are different ways of calibrating a 3D thermistor. We are going to learn how to calibrate using a multimeter.

3. Connecting Hot End to the Multimeter

Join the multimeter’s thermocouple to the hot end. An appropriate way is to find a space between the hot end and the nozzle and stick it in.

5. Filling Out the Table

Delete the old thermistor table and replace it with the new one after you have found the desired temperature for the resistance values.

Factors That May Lead to an Error in Temperature Range

Despite all data computation and calculations relating to thermistors, thermistor measures still display abnormally high margins of errors of over the acceptable 1% margin in 3D printers. These errors can be attributed to:

The following are several factors that will cause such errors:

Thermistor wires are quite fragile. They can easily be spoiled when changing the nozzle. The damaged thermistor could lead to an extremely low-temperature reading. This could in turn be disastrous to the printer since the reported readings are not the actual temperature. In some rare cases, it can lead to fire breakout.

This exposure is an additional factor to the normal drift in the time expected in any machine or component of a machine due to degradation.

Incorrect calibration data may cause errors in thermistors. Therefore, in addition to errors caused by tolerance, the margin of error here will be much higher than expected.

Thermistors are relatively consistent in performance, however, their tolerances decrease with a rise in temperature.

The deviation for thermistors used in some 3D printer hot ends may not necessarily be accurate at 1%. It may be higher like 2%, and even higher than this during printing.

Some components on the printer’s motherboard or abnormally high resistance in connecting cables can cause thermistor temperature reading errors. These incidents can change and drift over time.

Poor PID tuning can make a printer’s heated bed or hotbed temperatures swing back and, in some cases, be wrongly reported.

The main reason for one should buy a thermistor is if the one they have has become faulty.

Secondly, one could buy a new one if they wish to modify their printer to print at a higher temperature than the one usually designed for.

The most important factor in buying a new one is to ensure the compatibility of the firmware.

You should also consider buying from a recognized dealer so that whatever you buy is genuine.

A thermistor is a small component in a 3D printer, yet plays a pivotal role in printing. The status of the thermistor should not be overlooked since it could bring everything to a grinding halt.