There are many different types of resin materials in the market that can be used for SLA and DLP printing. Before choosing one over another, one should know the technology used to print these resins, advantages, and disadvantages. 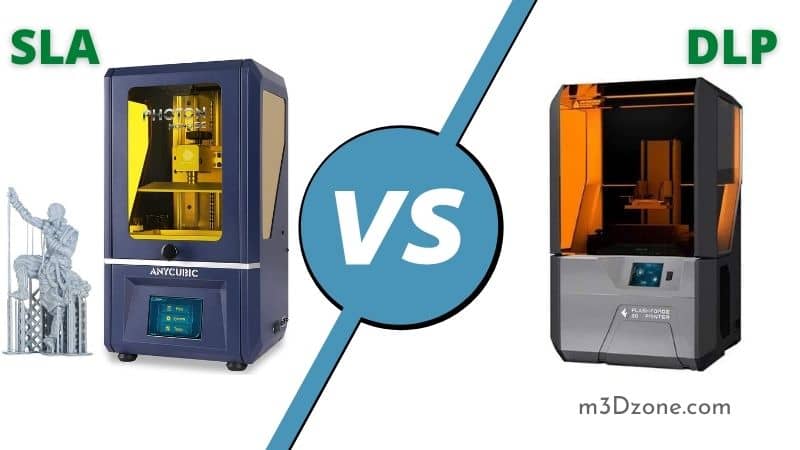 SLA and DLP technologies produce parts in similar ways, and the features are much identical. The main difference that separates them is the light source used to cure the resin.

Throughout this guide will dive into SLA vs DLP and will help you understand what is needed when using each type of material.

What Is SLA 3D Printing?

If you want smooth surfaces and intricate details, SLA 3D printing is for you.

SLA printing process utilizes VAT polymerization technology to cure the resin in the resin vat. The build plate is positioned inside a resin tank so that the entire layer of resin covers the whole surface.

When UV light scans the first layer of photopolymers, the resin photochemically solidifies. That is because they are sensitive to violet light.

When the layer is finished, the platform moves down one layer height, and a sweeper blade recoats the cured surface with a layer of uncured resin. The light source then solidifies the new layer, and the process is repeated, slowly building the part one layer at a time.

It also requires an additional post-processing step called sintering which involves heating the part until all the layers are fused. Sintering allows the material to become stronger and more durable than just curing alone would allow.

However, this extra step makes the production time longer and increases costs.

What Is an SLA 3D Printer?

An SLA 3D Printer contains a base for the 3D object to sit upon. A laser beam scans across the surface of the model while moving along one axis. 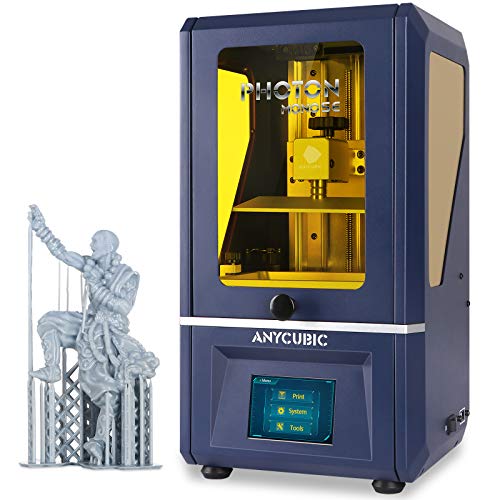 After each layer has been scanned, the printer moves upwards slightly to add the next layer. Each successive layer builds upon the previous ones until the entire model is complete.

SLA 3D printer works much like a photocopier as the scanner creates a blueprint of the desired image.

How Does an SLA Printer Work?

The machine copies the pattern onto thin layers of photopolymer material.

By exposing the photopolymer to different wavelengths of light, we can control how thick our final product becomes. For example, red light causes the polymer to harden rapidly, whereas blue light slows things down considerably.

An SLA 3D printer produces prints with fine details. This means that objects made using this method tend to look lifelike. However, there are some downsides to working with SLAs.

What Is DLP 3D Printing?

DLP printers use a digital light projector to project images onto a photosensitive material called photopolymer. 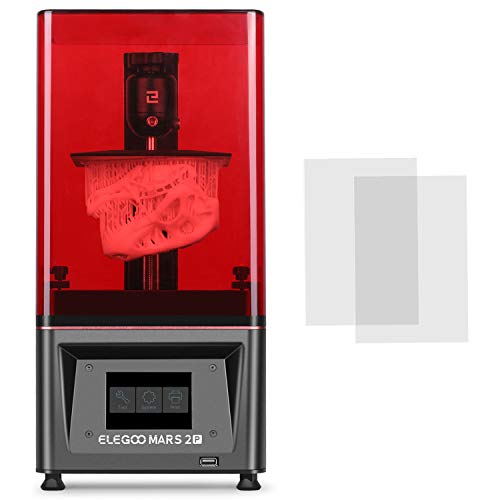 A computer generates a series of cross-sections from these files then prints each section out onto a flat surface. Once complete, they stack them up to create your final product. There’s no need for any support structure.

The projector uses a digital micromirror device chip that projects and controls coded light patterns that strengthen the resins. You don’t have to worry about whether something will fit perfectly because every piece has been tested.

What Is DLP 3D Printing Used For?

Because of its print speed and efficiency, DLP technology is often used for prototypes and small runs suitable for mass manufacturing.

However, due to its high cost per unit, it isn’t ideal for mass manufacturing.

Does DLP Print Upside Down?

A DLP printer can print in reverse. However, this feature comes at a price. The material must be preheated before printing. There may not be much support available for objects printed in reverse orientation.

Some manufacturers recommend using supports only for items that won’t move once finished.

Which Is Faster, SLA or DLP?

Digital Light Processing is faster than stereolithography. DLP printers typically take less time to produce items compared to SLA machines. DLP printers have one moving part: the stepper motor (check at Amazon) required to lift the platform up and down on the Z-axis.

It makes no difference to the operation of a DLP printer and how many objects are on the built plate but only the layer height. That is because there is no time difference between the LCD screen flashing up one or twenty objects on the same build plate.

The SLA printer takes longer because the laser has to be reflected to hit all the individual objects.

The quality produced by either machine depends largely upon how well the design file matches the actual dimensions of the finished item.

If the designer provides incorrect information, the printer won’t know where to place the following material layer and produce a defective part. When comparing the two technologies, consider their strengths and weaknesses separately.

How Do I Choose Between SLA & DLP?

If you’re looking for a quick turnaround time, DLP might be the way to go. You’ll probably want to try it first, as it takes a little time to get started. Once you’ve determined that it meets your needs, you can move forward with SLA.

Both processes offer advantages and disadvantages depending on your specific application. Here are some things to keep in mind:

SLA vs DLP: The Differences

SLA tends to do slightly better than DLP producing fine prints with sharp corners in resolution and accuracy. SLA printers can produce very complex shapes with a Z-resolution of 25 microns, while DLP printers offer resolutions ranging from 50 microns up to 100 microns.

The SLA uses expensive equipment, making it more challenging to get started than other techniques such as FDM. DLP printers are relatively inexpensive compared to their counterparts. But if you want something high quality, there’s always a price tag attached to it.

If you plan to work with large quantities of small products, SLA will probably cost you more money per unit than DLP. SLA is ideal for larger-scale production.

You don’t have to worry about having access to expensive tools. All you need is an ordinary desktop computer running standard operating system software. Since SLA uses UV light instead of heat, you can create an object without worrying about damaging delicate components.

Another significant difference between the two technologies is how they handle support.

While both require some frame to hold things together during printing, SLA requires additional materials to build those frames, whereas DLP doesn’t. So when it comes down to it, SLA is better suited for creating small items where DLP excels at larger ones.

In addition, SLA machines tend to print faster than DLP units, although not necessarily cheaper.

It takes longer to make a part using DLP than SLA because it needs to wait until every layer is cured before moving forward. Most SLA systems come equipped with software packages, so users don’t need to worry about programming. All they have to do is load the file and start working.

Despite being less accurate and having slower speeds, DLP technology produces higher strength parts because it builds layers upon layers rather than just one at a time.

And lastly, DLP printers are easier to clean than SLA devices. Since they don’t involve lasers, they won’t leave behind harmful fumes as SLA will.

Is DLP Better Than FDM?

Both technologies are capable of producing impressive results. Some people prefer one method over another based on personal preference. DLP tends to offer higher levels of precision than DLP. FDM uses plastic filament (check at Amazon) to produce stronger parts.

DLP has been known to cause headaches due to fumes emitted when the machine heats up. Many people who own DLP devices report experiencing migraines and nausea.

The resin used in DLP is toxic, so one must have proper ventilation.

FDM creates less toxic emissions and fumes given off by the melted ABS.

In DLP, layers cure simultaneously, so each layer gets harder before the next layer starts curing. In FDM, each layer cures separately.

The first layer might get too soft before the second layer sets properly. This could lead to warping or cracking. Also, DLP prints faster than FDM. Depending on your printer model, you can expect to finish a project within hours compared to days for FDM.

How Do Resin 3D Printers Work?

Resin 3D printers use resin to form three-dimensional models from digital designs. These resins harden after being exposed to ultraviolet light. There’s no melting involved; expose them to the right wavelength of light and let nature take its course.

Most resin 3D printers come equipped with a heated bed that keeps the resin warm during operation. When you turn off the power supply, the resin cools down quickly.

Many users add fans to circulate air around the area containing the resin to speed up the process.

The main advantage of resin 3D printing is that it doesn’t involve messy chemicals.

Unlike other additive manufacturing methods, resin 3D printing doesn’t require anything but a few drops of liquid resin. That makes cleanup easy. Another benefit is that resin 3D printers produce high-quality results.

Because these machines rely on visible light, their resolution isn’t affected by ambient lighting conditions. If you do run into trouble, most resin 3D printers include instructions for troubleshooting common problems.

What Is MSLA Printing?

Multi-Material Stereolithography uses two different types of materials to create an object. One type of material is called “liquid photopolymer,” similar to what we know today as plastic.

It takes about 30 minutes to solidify completely. Then, the part is cured under an LCD light source.

Afterward, the user removes the part from the build plate and places it onto a platform to include additional layers. A new batch of liquid polymer is then applied to the surface of the previous layer.

Each subsequent layer builds upon the last until all desired thickness is achieved.

The second type of material is known as “powder.” The powder has been around for quite some time but was not widely adopted because it required special equipment.

However, now there’s a machine available that makes powder printing possible on any 3D printer.

How Does Multi-material Stereolithography Work?

MSLA works by using an LED array as its light source. The LEDs are arranged in such a way that you can use them for both curing and exposure. This allows you to print with multiple colors at once.

The process begins when the first layer of your model is printed. After this initial step, the following steps occur one after another. First, the top layer cures while the bottom layer remains uncured.

Next, the bottom layer is exposed to UV light through the previously created structure. Once again, only the top layer is affected. Finally, the entire assembly is placed into a heated oven to cure the whole thing.

With so much choice out there, how do you decide which method best suits your needs?

Start by considering the advantages and disadvantages of each technique. You’ll be able to make an informed decision based on your needs.